Some of what follows is outdated now. BMW seemed to have opted to bring the "lag-fix" for newer (i.e. post-09/07 built) MSD80 cars as default to the newest software release, now current is at least ISTA/P 2.44.1, but this is not so. It first seemed like the "wastegate retrofit" option has disappeared from the ISTA/P menus from v33.1 on - even for MSD80 cars that previously needed to have it selected after the update, but it still has to be selected specifically one time. The setting is applied once to the car itself and stays there for any subsequent update - it just does not have to be re-selected again (and it cannot, once it has been applied).

This makes life a whole lot easier for customers and dealers, no bells and whistles anymore... just get an update from v32.1 upwards, if your car's build date is pre-10/07, request the "wastegate retrofit" and you'll be set, at least lag-wise!

With regard to wastegate rattle, one could believe, that since there is no rattle-fix any more they could refer affected customers to, BMW would have to fix any rattles by replacing the hardware from now on. However, this proved wrong: An update for the SIB111307 from May 2009 now reads:

This read until April 09:

Let's begin where it all started.

BMW used flawed wastegate actuator rods in N54 cars (x35i) with build dates up to 09/07. Well, actually, they said once that these have been fitted up to January 17th, 2008. Those rods elongated over time so that after a little wear, the wastegates did not close tightly any more, which gives a ticking, rattling or clanking sound at idle.

In order to avoid costly replacements, BMW brought up a "rattle-fix" in software with Progman v29.2 in 03/08. This software fix made the wastegate become open at idle. Only when you depressed throttle, the wastegates were closed and the resulting delay to build thrust could be noticed as lag, as depicted in this image: 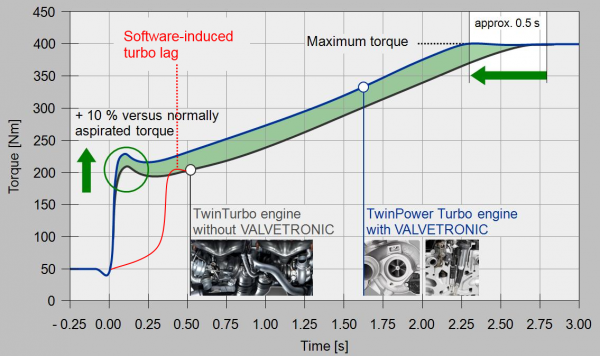 If your car got a software update for any reason (also non-ECU-related) after 03/08, it may show this lag. There is no hidden menu or something where the software version can be displayed, BTW. An update can occur invisibly to you when you have a service visit. "European Delivery" cars, for example are updated upon redelivery at the VPC weeks after initial build. Only the dealer can tell you the exact version that is currently installed on your car (short of using a diagnostic unit).

This "turbo lag" was initially denied when first reported and only after a long time of continuing pressure, BMW acklowledged that there was a problem which first lead to a press statement and in January 2009, to a release of a new software called ISTA/P 2.32.1, which is referenced in SIB 111307. Now-current is at least ISTA/P 2.44.1, which you can see here.

From here on, everything depends on your car's build date:

In 03/08, there was a change in ECU/DME hardware as well - BMW now uses MSD81 hardware instead of MSD80. Some cars up to 05/08 can still have MSD80, BTW. This change was meant as a counter-measure for flash tunes. The v29.2 software release that came out along with MSD81 has some new schemes built-in to also detect piggyback tunes.

MSD81 units have different DME software versions - they have the same numbering scheme but they are different, e.g. the cryptographic keys to protect them have changed. Also, BMW says that cars having MSD81 are not affected by "turbo lag", since their software was never altered because such cars always have new wastegate rods.

Thus, the "lag fix" is not offered for cars > 03/08. According to BMW, those cars are "not affected", although some owners tell otherwise. If you own such a car and feel lag, you may have one of the few post-03/08 MSD80 cars and most likely have software before ISTA/P 2.32.1. Otherwise, you are out of luck as BMW denies lag claims for MSD81 cars.

BTW, if you happen to get v32.1 or later for another reason: Lag-wise, it won't make any difference.

Such cars have MSD80 for sure and can have deficient wastegates (my car is 09/07 and had new wastegates). These may but don't have to develop rattles. If the cars have been updated with v29.2 to v31.x, they will most probably show turbo lag. This lag is worst with v29.2 to v30.x. From v31.x onward, the lag is less noticeable. This holds true for >= v32.x as well - thus updating the software alone is no cure for turbo lag, UNLESS you also get the "wastegate retrofit" option, aka

This is not a term that refers to hardware replacement, but a DME software option that restores wastegate operation to the same behaviour as for pre-29.2 in order to satisfy the "most senstive BMW drivers" that are bothered by the turbo lag - but requesting it comes at a price (see below).

The option can only be applied using ISTA/P-equipped diagnostic machines (in contrary to the older Progman stations), which should be standard nowadays anyway. Correctly, the current versions are named like "ISTA/P 2.32.1" instead of "Progman v32.1". To get the old wastegate behaviour back, one has to get an ISTA/P 2.32.1 update or later and afterwards, using ISTA/P, the option for "wastegate control" has to be activated in the "retrofit" sub-menu of ISTA/P (read the SIB for details). This option is not offered automatically, the technician has to actually look for it. Also, the option is only available where applicable (that is, only for cars < 10/07).

However, bear in mind, that this does not fix the flawed wastegates. To the contrary, the fix may in fact lead to the ticking noise. BMW clearly says that you risk this if you specifically request old wastegate operation. BMW thinks there is no obligation to replace ticking wastegate hardware, although there are reports that this has been done.

Those cars have MSD80 ECU hardware and most probably new wastegates. They will get the lag-fixed version automatically with the next software update due or if one is specifically requested because of turbo lag (minimum ISTA/P 2.32.1 or Progman v32.1 is required). There is no need to select any option in the ISTA/P menu and reportedly, it is not even available with post-09/07 cars.

Before you ask questions here: I doubt that there are any left which have not already been answered in the this long "sticky" thread from E90POST...

A few of these questions are:

Q: My dealership tells me that they can only update my car if they find anything wrong with it. What can I do?

A: Show them this SIB and explain to them the meaning of this sentence: "If said "turbocharger lag" is a customer's complaint, then the vehicle's DME software can be retrofitted to the original waste gate operation." (applies only to MSD80 cars). If they won't do it (e.g. for reasons that you request the update despite having no wastegate rattles), have BMW NA customer service explain it or point them at this offical press release where it says: "Clients with vehicles produced from June 2006 through September 2007 may request installation of the January 2009 software update.". Mind the next sentence, however: "Clients who get this update should understand that there is a possibility of slightly increased engine noise levels under certain circumstances." which refers to cars with flawed wastegates deliberately skipping the rattle fix in favor of the lag fix.

Q: How can I see what software version I have? Are there any secret menus?

A: Short of using a diagnostic tool, you cannot (the Bavarian Technic tool does not show it, either). Go and ask your dealership (they can only tell you the target data status in this list). Anyway: Who cares? Do you have lag?

Q: I have more/less mileage or louder/quieter exhaust note after an update. How come?

A: Reports are inconclusive as of yet. Some owners have reported such changes, others did say it was unaltered.

Q: My car seems to have a higher top speed after the update?

Q: The (standard, non-active) steering feels a little lighter after the update?

A: Yes, this has been reported by some people.

Q: Shifting and acceleration of the steptronic version are smoother after the update?

A: Yes, especially in DS mode.

A: Have your dealer look at them. He has to measure the thickness of the rods in order to find out (old ones are 6mm diameter, new ones 8mm). There is no VIN-based database on that. However, if your wastegates don't rattle, you are not entitled to a preventive hardware replacement anyway - and since May 2009, you aren't even if they do.

A: In most cases, you could find out by using http://www.realoem.com. However, for some cars, both MSD80 and MSD81 are shown and with newer versions of the ETK, only MSD81 is reported, so you will have to get at the ECU compartment to find out or have the dealer check with a diagnostic unit.

Q: How does that "lag" feel, anyway? How can I reproduce it?

A: Go in 4th gear (or M4 with steptronic) at ~1500 RPM, then depress throttle halfway. If you feel a second rush of acceleration only when RPM reaches 3000 after ~0.5 seconds, you are experiencing lag, since full torque is supposed to be present from ~1400 RPM already.

Q: I own a 135i and feel lag. Is my car elegible for the wastegate retrofit?